She cooks, he eats. He likes to do dishes, she doesn't. All is fair in Foodie Pleasure.

On Monday evenings, half of FP usually plays basketball and the other half goes to yoga. Last Monday we decided to take it to the boxing ring. No, we weren’t beating each other up but we were in attendance for the first Culinary Fight Night (CFN) match of the summer at Sons of Essex on the Lower East Side. As we wrote in a prior blog post, CFN is an interactive cooking competition that pairs local chefs against each other in a Vegas-style boxing ring setting.

As we arrived, we could sense the excitement in the air. Attendees were filing in and drinks were being served for all. We caught up with our friend Chef Kelvin Fernandez, who served as emcee for the event.

Just like with any boxing match, the contestants were announced as they entered the stage. Chef Moe Ortiz was on the red team and Chef Anton Testino was on the blue team. Using secret ingredients (Rice Krispies, black garlic and jelly beans), the contestants had to prepare meals for the audience and of course the judges. Chef Elle Simone, DJ New Era, Stephen Yen, Jose De Jesus and Sheena Das served as judges.

Chef Anton started CFN off with Panko Crusted Shrimp for the crowd. The shrimp was cooked with a nice amount of spice and the salad provided a refreshing base. 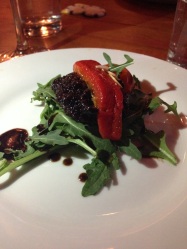 Chef Moe treated the crowd to Crispy Chicken with Arugula for the crowd. We enjoyed the mix of chicken and a well-dressed salad. 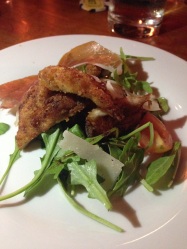 For the entree round, Chef Anton cooked a great pork tenderloin over risotto. The judges were all in agreement that it was a great dish. 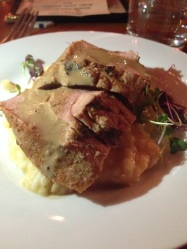 Chef Moe served penne with turkey sausage, and broccoli rabe, which may have been Allen’s favorite dish of the night.

While we didn’t stick around for dessert, we learned through CFN”s social media that Chef Moe was named champion. Well deserved victory for Chef Moe and her team.

This popular event is sold out for the month of June but you can purchase tickets for the Semi-Finals in July, which will take place at a secret outdoor location! If you enjoy competition, a great atmosphere and most importantly, great food then you need to check out Culinary Fight Night for yourself!

There was an error retrieving images from Instagram. An attempt will be remade in a few minutes.