She cooks, he eats. He likes to do dishes, she doesn't. All is fair in Foodie Pleasure.

Diversity  is delicious. That’s the theme of this year’s Workmen’s Circle Taste of Jewish Culture Street Festival. The event will feature dozens of food purveyors putting their individual ethnic spins on traditional Jewish foods and will also feature modern takes on traditional Jewish dance; music; and family-friendly activities, including arts-and-crafts. 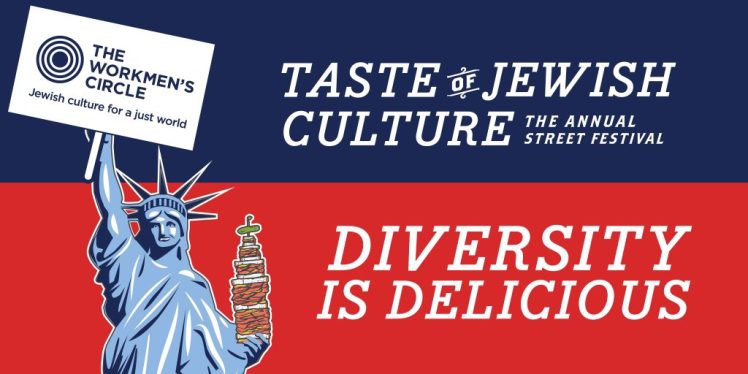 Launched by the Workmen’s Circle in 2014, the festival is part of the non-profit’s year-round Taste of Jewish Culture event series, which includes hands-on workshops, walking tours, tastings, film screenings, and book discussions. Vendors and restaurants participating in festival include Ample Hills Creamery, Brooklyn Brine, Destination Dumplings and many other delicious options. Click here for a complete list of participants.

“Our participating restaurants—representing a myriad of different cultures—will be putting a Jewish spin on their traditional dishes. It’s a unique opportunity to send the message that we are all richer for the many contributions of our immigrant population and to taste something innovative!” says Ann Toback, Executive Director of the Workmen’s Circle.

For this year’s festival, the Workmen’s Circle is partnering with Emma’s Torch, a non-profit social enterprise that trains and empowers refugees in the culinary arts. The Workmen’s Circle has been cultivating a proudly progressive, diverse, and inclusive community rooted in Jewish culture, tradition and social justice activism for more than a century. To learn more about the Workmen’s Circle, visit their website.